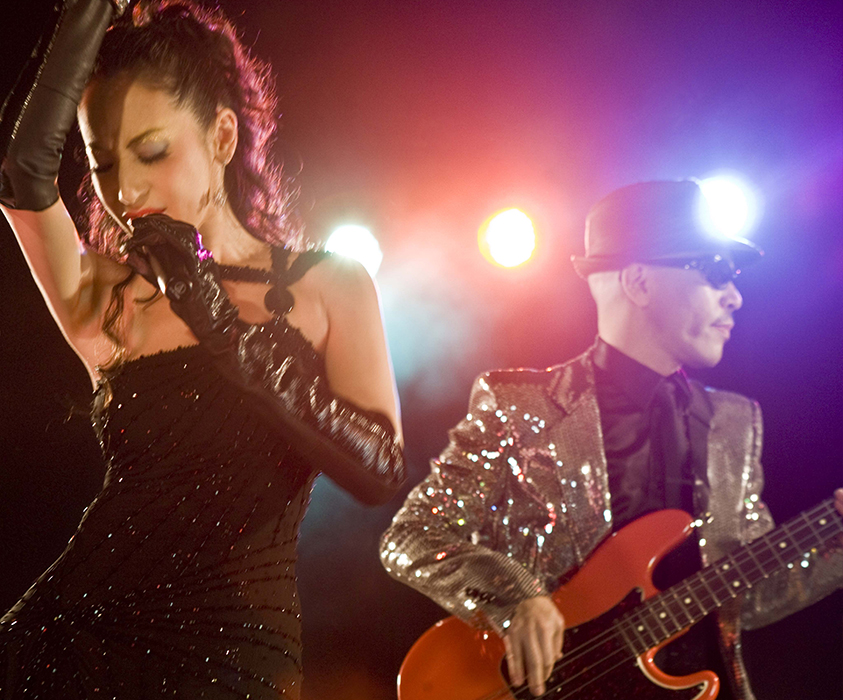 English
COLDFEET is based in Tokyo, Japan’s largest and most intriguing city. A duo, the band features composer/vocalist LORI, the daughter of an American clinical psychologist father and Japanese harp-playing mother, and WATUSI, a co-founder of the legendary drum-and-bass outfit Mushroom Head who has produced and played bass on more than 100 CDs.

COLDFEET fuses playful eroticism, sensual vocals and captivating melodies with a lush cinematic ambience, positive, provocative lyrics, and an offbeat humor anchored by the dichotomous themes of personal strength and vulnerability. The result is a unique, inventive sound that retains the appeal of pop while embracing the bite of new wave, jazz and rock. LORI and WATUSI have been influenced by an array of artists, from Devo, Massive Attack and Sade to Gershwin and Ella Fitzgerald, as well as the films of David Lynch and Sam Raimi. This diversity of media and genres is fundamental to the COLDFEET sound.

COLDFEET’s popular debut single, “Pussyfoot,” was quickly embraced by listeners and the music press. After a successful first tour of major markets across Japan, LORI and WATUSI set to work on the “Pussyfoot” video. Set at night in the dark, storied forests near Mt. Fuji and shot by film director Iwai Shunji’s “Swallowtail” crew, the piece showcased COLDFEET’s mastery of visual impact and their innate flair for distinctive, surrealistic imagery. The video enjoyed heavy rotation on Japanese music programs and was highlighted on “Party Zone,” a popular show that reaches 60 million households in 41 countries under the auspices of MTV Europe.

COLDFEET’s albums and maxi-singles are available on SONY Europe. They continue to be highly sought after as writers, producers, musicians, and performers in the Tokyo and national music scenes.

Since 2004, COLDFEET released four 12-inch vinyl dance singles with their unique interpretations of new wave, disco, and funky house including “Bodypop,” “Superthing,” “Mop Me Up,” and “Boom, Clang, Bang.” Quickly becoming a club live show favorite throughout Japan, COLDFEET has toured with FreeTEMPO, Sugiurumn, akakage, and other top DJs. Their much awaited album, including a dance single featuring Mondo Grosso, was released in Autumn 2005.

On July 11th, 2007, COLDFEET released their 5th album,The single sold out immediately and became a “must play” song at clubs.

On Dec. 10th of the same year, commemorating the 10th anniversary of their debut, COLDFEET released their 6th album “TEN”, which hit #1 on the iTunes Dance Album Chart and went on to spend several weeks there.

In August of 2009, COLDFEET brought in a lavish team of remixers for the release of “TEN remixes”. In the following November, having received Michael Jackson’s official permission prior to his passing, COLDFEET released the covers album “MJ THE TOUR” attracting tremendous interest for the duo as well as the plush lineup of guests on the album.

In August of 2019, release a new album “Core” to commemorate the 20th anniversary.